Gravity Control has received many submissions regarding antigravity over the years, but none compares with the submission of one W. David Barclay. Read how his theory transcends all rocket and combustion science taking us to the new level of a field within a field that causes abrasion, interaction and resistance to create fuel-less propulsion and achieve antigravity.

As we continue to pursue this most amazing and wonderful subject, we are now exposed to Project Unity.

We have embraced Project Unity because after years of research it would appear that if gravity control isn’t a project waiting in the wings of government, it is the obvious next step for man as we contemplate our dwindling oil supply and try to reach for the stars.. The thousand year old technology of rockets has taken us to the moon. And perhaps, Mars. But this kind of push propulsion energy and the current understanding of technology is in for a big shake up. The new science, as partially explained by Wilbert B. Smith has nothing to do with rocket technology. It’s more in line with the works of Keely, Tesla, Kozyrev and currently Alex Frolov.

Gravity control is a matter of time. The fact that some of the new science contradicts current thinking should not come as a surprise. Newton’s Laws will be challenged as surely as his students were heard to say, this is hard. For those capable of understanding Project Unity is its own reward and with it comes the challenge to help shape the things to come.

Against a background of mainstream science, W. David Barclay offers new genius with a theory so profound as to be capable of moving our entire civilization forward. If there is a spark of a new idea and it catches fire we are all privileged to witness the beginning of a new era, Project Unity.

Free Energy and the FFM System

Imagine a continuous supply of cheap clean electrical power to any location on the planet, whereby assuring a sustainable future economy through free energy.

Such a system for free energy is now being developed, and it could bring an end to our dependency on a non-renewable supply of oil, coal and natural gas.

In other words, the idea is to create a relative unified field of frequency, (the FFM System), within another unified field of frequency, (the Earth’s field), whereby utilizing the differential existing between the two systems to provide an electric charge. This effectively creates a differential in electrical charge between the FFM System and the surrounding environment, which can be transferred to electrical generators and delivered through the existing electrical system.

The beauty of the FFM System is its natural simplicity, as it requires no fuel supply of any kind, in the form of liquids, solids or gases. The FFM System functions on the basis of the existing continuance of field frequency associated with any unified field system, but unlike many other experimental systems the FFM System allows for the controlled modulation of the underlying force of energy.

It can be assured that all those personally involved with the development of the FFM System will find the process to be an exciting and rewarding experience, as our goal is to provide the world with the first completely fuel free energy system. Not even water is used in the process.

In terms of economic benefit, the FFM System could supply low cost efficient electrical power to any geographic location on the planet, making it possible for even the most undeveloped nations to benefit from free energy. 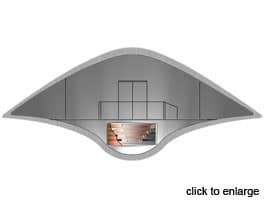 This is a representation of a saucer style craft with a Field Frequency Modulator situated in the belly of the craft. A cut away of the magnetic array which also shows a four phase magnetic array. 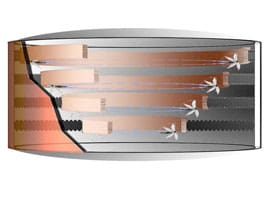 This is an enlargement of the Field Frequency Modulator shown in the previous picture. And as can be seen from this drawing there are four tiered rings of magnetic discs with the smallest ring of discs at the bottom and the largest ring of discs at the top. Each disc can be manipulated, but the total array must be manipulated in a synchronized manner, up or down and from side to side allowing the point of focus to be shifted in any direction. 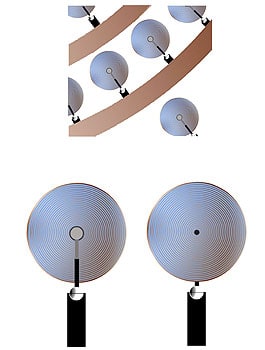 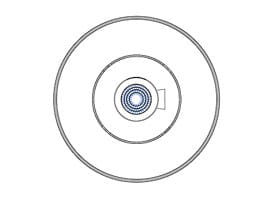 This drawing shows a plane view of the Field Frequency Modulator situated in the belly of a saucer type craft. 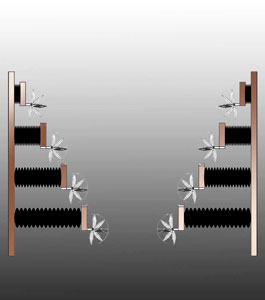 This drawing represents a four phase Field Frequency Modulator where the up and down and side to side motion of the magnetic discs is shown. Each ring of magnetic discs is continuous, in that the spacing between the discs is sufficient to allow for optimum movement without interference from either side, left or right, and up and down, top and bottom.

This drawing shows a single magnetic disc mounted on a control arm and the limit of the up and down movement. 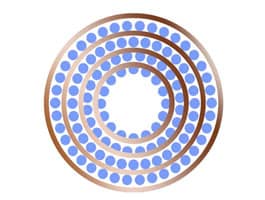 This is a plain view of a Field Frequency Modulator consisting of four tiered rings of magnetic discs, allowing for the focus of the underlying energy, (non-linear time field frequency acceleration), required to drive a saucer type craft. 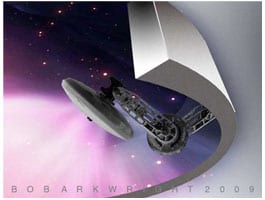 An artists rendering of a single magnetic disc mounted on a control arm. This drawing is symbolic of Project Unity and the quest for gravity control, an inspiration to carry us forward.

Project Unity is a work in progress and there is still much to be done. Such as configuring the ratios involved in the placement of the magnetic discs in each of the 4 tiers, the radius of each tier and the vertical spacing required. Each part and piece of the device must be accounted for and factored into the creation of a budget based on real cost assessment of all materials.

Gravity Control is a matter of time.
Anti-gravity technology research in electromagnetic propulsion and other technologies is under development, and we would like to document its discovery.