Here is an up to date compendium of pics and diagrams displaying Project Unity.

And now, here’s W. David Barclay, author of Unity, to explain what you see.

The exterior surface of the craft is smooth without protrusions of any kind. There are no hatches, windows, gangways, portholes or other avenues allowing for direct physical access or entrance to the craft. The drive system is located in the belly of the craft, the bottom portion extending below the rim.

So how do you get in?  Access to and from the craft is by means of instantaneous transformation which means you are either inside or outside the craft.  Instantaneous transformation involves a merging of two locations…with one being the interior of the craft and other being a location outside of the craft.  The two points or locations are brought together…much like being in two places at the same time and then separated.  It matters not what stands between the craft and another location, whether it be the walls of a building or any other physical structure…the process is immediate and instantaneous as no coming or going is involved or experienced from a ground based observers point of view or from those piloting the craft.  Keep in mind that a Unity type craft functions on the basis of non-linear dynamics whereby the craft itself exists as a unified field system in relation to time and space remaining relative to the craft.  Therefore the craft can access any condition of universe in an instantaneous manner without consideration to the vastness of space or the apparent distance involved. 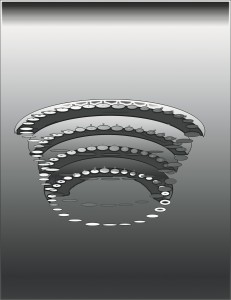 This is a clear view of the 4 tiers of magnetic discs, with each white circle representing a magnetic disc mounted on a control arm allowing the energy field of the craft to be focused vertically up or down or from left to right.  This configuration allows for navigation in any chosen direction. 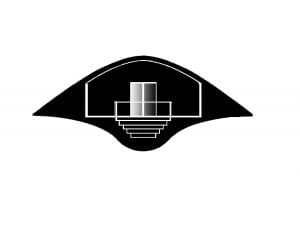 Section View…allows us to view the 4 tiers of magnetic discs located in the belly of the craft below the main deck.

Some years back before I understood Unity it seemed logical that there should be a door or hatch by which to enter the craft but no such door or hatch exists in an actual craft of this type…hopefully that explains the flaw in the picture above.

Below we have a drawing of the magnetic discs…rings of magnetic discs are made up of these individual discs and it is the synchronized manipulation of all the discs constituting the four rings as shown above that provides for the drive of a Unity type craft.  This means it is completely fuel-less…a fuel-less drive system allowing the field dynamics of the craft to be modulated in a controlled manner.

The magnetic discs can be turned from side to side…180 degrees to the right and 180 degrees to the left…and they can be lifted vertically up and down…when the discs are manipulated in a synchronized fashion, which modulates the field dynamics of the craft, the craft moves in a particular direction.  The direction of travel can be altered by manipulating the vertical and horizontal movement of the control arms…while the rate of motion is determined on the basis of the underlying energy provided by the angle of focus.  The controlled modulation of a Unity type craft involves nothing other than focus…and in this respect it is the simplicity of design which is the most difficult aspect of understanding it would seem.

Considering this is possible on the basis of focus involving the controlled modulation of an underlying force of energy leaves little to the imagination in attempting to perceive something of a more advanced design.  Project Unity is a simple system allowing for instantaneous transformation as well as localized transport in both a liquid or gaseous medium.

All physical structure is dependent on a similar format for its form and function but it is the controlled modulation of the underlying force of energy which allows for Project Unity and its ability to provide a fuel-less drive for interstellar transport.