Not all electric cars have to be ugly little boxes. I can almost hear the sigh of relief. The increase in interest from auto makers suggests the majority of us will be driving one in the next 5 to 10 years. And as electric cars become more mainstream, like most technology, costs will go down and significant improvements will develop. Tesla was one of the first electric car makers and many have taken a shine to the Tesla Roadster. But they’re not the only ones busy coming up with cool electric car designs.

The Tesla Roadster is a great example of an electric car that will make heads turn. Even Magnum PI probably wants one.

There isn’t a lot known about the electric BMW that was at the Detroit auto show, but its coming soon. 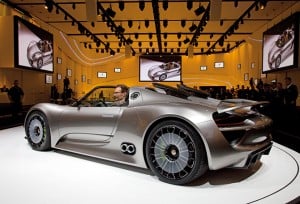 The Porsche 918 Spyder is a plug-in hybrid supercar that provides the same thrills as your “average” Porsche with 718 horsepower, a mid-engine V-8 with two electric motors, and a claimed 78.4 mpg.

Audi is getting on track with an e-tron supercar too. The hybrid driveline will be followed by all-electric vehicles soon. While quatro has become synonymous for all wheel drive, e-tron is to be the Audi brand name for electric mobility. Coincidentally, etron is also French for turd, but don’t let that skew you.

The Fisker Karma is no slouch in style either. A plug-in hybrid sports sedan, its introductory model will be about $80k, with less expensive models to follow.

Makers of the 60′s muscle cars are also joining the race. The Dodge Circuit EV could be in production by 2011.

This concept car is right out of the matrix, but its entirely possible you’ll soon see a Cadillac Converj rolling down the highway. While the roadsters and supercars of the new electric era don’t come cheap, its only a matter of time as they become more common before the prices begin to drop.